9/7/2020
School Archivist and former Dean of Faculty, Jake Emery ’71, unearthed the story below from an FVS Bulletin published in the midst of World War II. Albeit with very different circumstances, the lives of students then and now share some parallels. 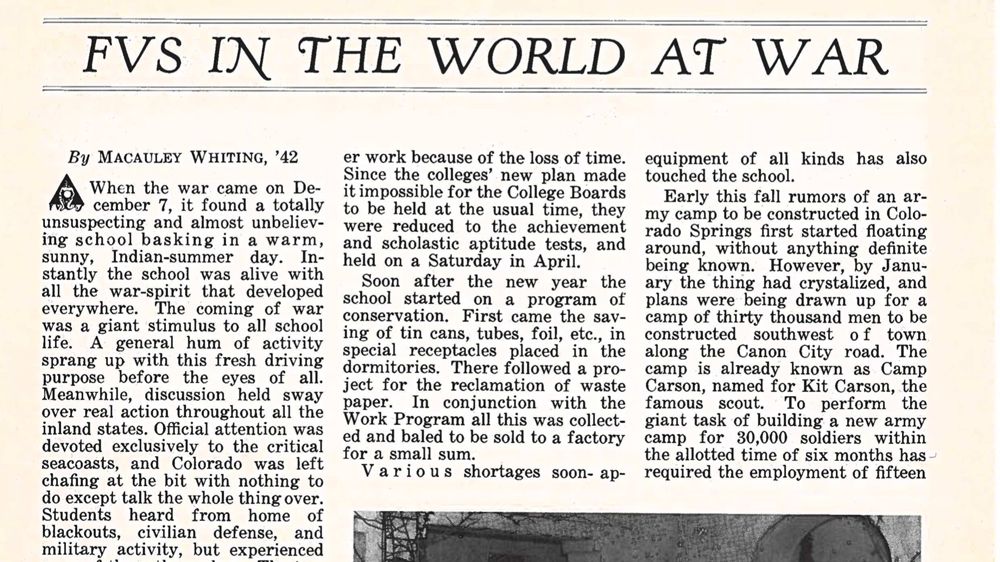 When the war came on December 7, it found a totally unsuspecting and almost unbelieving high school basking in a warm, sunny, summer day. Instantly the school was alive with all the war-spirit that developed everywhere. The coming of war was a giant stimulus to all school life. A general hum of activity sprang up with this fresh driving purpose before the eyes of all. Meanwhile, discussion held sway over real action throughout all the inland states. Official attention was devoted exclusively to the critical seacoasts, and Colorado was left chafing at the bit with nothing to do except talk the whole thing over. Students heard from home of blackouts, civilian defense, and military activity, but experienced none of these themselves. The two weeks until Christmas vacation passed so quickly they were hardly noticed.

During the vacation, boys from the East and West encountered our war effort at first hand and returned with a realization of the job at hand and a solid determination to conquer the immediate reversals with steady hard work. The first night of the winter term, Mr. Froelicher talked to the school on the place of FVS in the war effort. He had inquired of government, military and college authorities what they thought a preparatory school should do to contribute to the war effort. The universal opinion was that it should keep going as before, with no speed-up of program, but with more emphasis on the quality and earnestness of the work. Any suggestion for change would come later, they said. Meanwhile, most of the colleges added a term in the summer, which meant that most of the sixth formers would be going to college immediately after graduation. To give the boys some vacation, the school set graduation a week earlier, accompanying this with the omission of the spring term holiday, with a plea for harder work because of the loss of time. Since the colleges' new plan made it impossible for the College Boards to be held at the usual time, they were reduced to the achievement and scholastic aptitude tests, and held on a Saturday in April. Soon after the new year, the school started on a program of conservation. First came the saving of tin cans, tubes, foil, etc., in special receptacles placed in the dormitories. There followed a project for the reclamation of waste paper. In conjunction with the Work Program all this was collected and baled to be sold to a factory for a small sum. Various shortages soon appeared. Because of the lack of tires, the school has had to prohibit the use of its cars for any but the most urgent trips. Gone are the extra trips to town, the ski trips, and other luxuries unless outside transportation is obtained. Everyone has been requested to reduce his sugar consumption as much as possible, and rationing has already begun. Since September food and other commodity prices have risen so sharply that some of the luxuries have had to be cut from the school menu. A scarcity of sports equipment of all kinds has also touched the school. Early this fall rumors of an army camp to be constructed in Colorado Springs first started floating around, without anything definite being known. However, by January the thing had crystallized, and plans were being drawn up for a camp of thirty thousand men to be constructed southwest of town along the Canon City road. The camp is already known as Camp Carson, named for Kit Carson, the famous scout. To perform the giant task of building a new army camp for 30,000 soldiers within the allotted time of six months has required the employment of fifteen thousand workers. This multitude of amply, if not extravagantly, recompensed jobs proved a great lure to many of the workmen at school, so great that after spring vacation it became impossible to maintain a staff of waiters. This, however, provided only temporary inconvenience, for the fifth and sixth formers immediately volunteered to fill the breach. A system was worked out by Fred von Stade and Mrs. Elliott, the school dietician, and the new order went in without a hitch, providing even better service than before. Ten members of the fifth and sixth forms, with a captain in charge, wait on the tables, changing shift weekly. Then the boys in First House volunteered to set up the tables and wait on the waiters, thus earning for themselves the title of "the setter-uppers" or "the gentlemen's gentlemen's gentlemen". Fred von Stade has been the head of the whole group, with McWhinney supervisor of the younger boys.

Finally, the war has struck directly at the masters. Mr. Canby was drafted on April 6 before he had completed his first year of teaching. No others left before the end of the year; but by the end of summer, Mr. Brown, Mr. Josephs, Mr. Newman, Mr. Kent, and Mr. Mathias will probably enter the armed forces.
Back