Mid-October weather is always a crapshoot in the Rocky Mountains. We had summited Mount Democrat, a barren 14,154-foot peak in the Mosquito Range of central Colorado, under clear skies and were traversing a 14,000-foot ridge to summit Mount Cameron, when a few clouds appeared and a sprinkle of snow began to fall. Suddenly, lightning bolts jolted down around us, followed immediately by explosions of thunder. Fortunately, my lesson of the day for my outdoor ed students had been to eyeball and plan potential escape routes before ascending, since we did not want to bail off a steep ridge only to encounter an impassable 50-foot cliff. Unbeknownst to me, however, one of the students had sore feet and had recently (and unwisely) changed from hiking boots into tennis shoes. 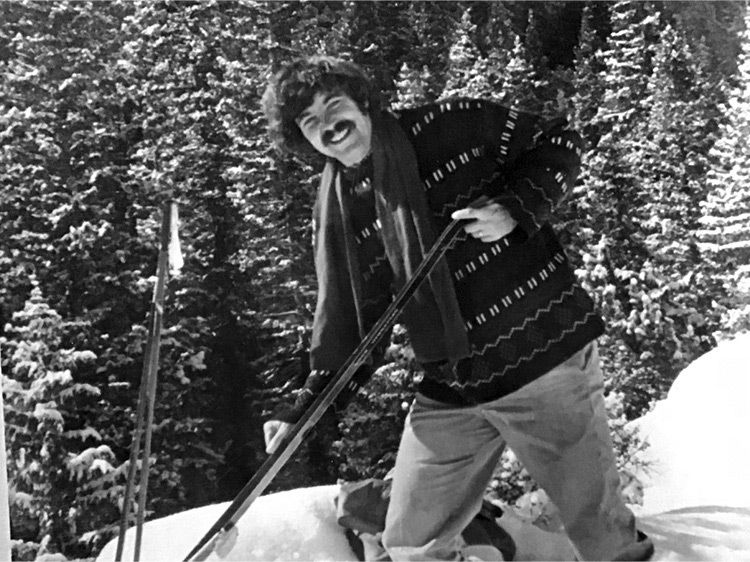 Eric Waples was Fountain Valley School’s fifth headmaster from 1987-1995 and taught at FVS from 1972-1995. He established the School’s outdoor ed program in the early ’70s, and it has been thriving since then.

I sent the rest of the group in a zig-zag pattern down a very steep, loose-rock talus slope, but I then had to wait on the ridge top as the student changed back into his boots. With each thunderclap, he yelled, “Oh my God! Oh my God!” At the same time, I was thinking, what in the world am I doing up here with this person? The answer to that question was that I had recently convinced Fountain Valley School to offer outdoor education as a fall athletic activity. We made it down to our base camp safely, but that night it snowed heavily, almost collapsing our tarps. I woke up the next morning worrying about whether the 24-passenger bus I had managed to drive up to our 12,000-ft. base camp might now be stuck there for the winter!

When I was an impressionable 14-year-old from Iowa, I went on a guided climb of the Grand Teton, the highest mountain in Wyoming’s Grand Teton National Park, with Barry Corbett and Jake Breitenbach, who would later become the lone fatality on the 1963 Everest Expedition. Barry and Jake had both attended Dartmouth, and I thought they were both very cool guys. During that adventure, I not only developed a life-long interest in the outdoors, but I also decided that I wanted to go to Dartmouth as well.

Years later when I arrived at FVS in the fall of 1972, I was surprised at the lack of any mountaineering or formal outdoors program given the School’s prime location adjacent to the Rocky Mountains. After initially coaching JV basketball and JV soccer (common new faculty assignments!), I proposed to Headmaster Lew Perry that FVS begin a formal mountaineering and outdoor education program. I probably emphasized the “education” component to give my proposal a bit more gravitas, otherwise, it might have sounded like just having fun in the mountains—which, in fact, it was!

I didn’t have any lofty goals in mind—I simply wanted to spend time in the mountains.

The major problem with my proposal, which I did not dwell on with Lew, was that as the primary instructor of the program, I had limited mountaineering experience and no experience at all of teaching “outdoor education.” That is where Fountain Valley’s long-standing tradition of “learning by doing” (or sometimes just winging it) came into play. And I was in the right place at the right time. The late ’60s and early ’70s was the time of the publication of The Foxfire Book, The Last Whole Earth Catalog and a variety of other resources celebrating experiential, back-to-nature, and self-sufficiency movements. Outward Bound had only recently started its first United States program in Marble, Colo. in 1962, and the first successful American Everest expedition in 1963 had sparked a renewed interest in mountaineering. Consonant with these trends and events, Fountain Valley initiated Interim week, the outdoor education program, and the outdoor orientation program all during this time period. FVS also purchased land for what is now the Class of 1969 Mountain Campus. I vividly remember walking the boundaries of that land with John Raushenbush, Mike Cronk and Don Klingler before the property was purchased. The 40-acre plot of land was offered at a good price and had a prime location facing the cliffs beneath Mount Princeton. I suggested using pre-cut logs for the structure which, with some renovations along the way, eventually became the Mountain Campus of today.

In order to acquire more mountaineering experience, I persuaded Outward Bound to let me take their instructor training course in the summer of 1973. That was invaluable not only for acquiring new skills but also for making many useful connections in the Colorado mountaineering and outdoor community. Additionally, I attended the first National Conference on Experiential Education in Estes Park in the Fall of 1973. Besides getting to hear the keynote from famed mountaineer Willi Unsoeld, who would die during the first ascent of the Everest West Ridge in 1963, the Estes Park Conference also provided access to many human and organizational resources from all over the country. A Native American I met there inspired both my interest in outdoor survival skills and the Primitive Survival Interim in Comb Wash, Utah, which was perhaps the most educational of any of the outdoor programs I did at Fountain Valley.

During that Interim, we dug for water, used the primitive bow-drill method for making fires, made figure-four traps to catch pack rats, which taste like chicken, using prickly pear as bait beneath a large flat rock that flattened them, learned to flintknap to make knives and spearheads, made and learned to use an atlatl, and hefted stone axes. I had a hidden reason for wanting to acquire these kinds of outdoor survival techniques—I had a terrible sense of direction and in the pre-GPS days, that could be a problem—but not if the group and I could survive no matter where we were!

With a limited budget, one of the first challenges I faced in starting the program was finding gear for students who didn’t have their own. Outward Bound gave us some free equipment, and Lester Guidry, who ran the Forward School of Mountaineering and taught winter survival skills at the Air Force Academy, helped procure more free equipment from Fort Carson. We also made trips to local army surplus outlets for wool clothing. Food was simple and low budget as well. I remember cooking a lot of Kraft macaroni and cheese and instant oatmeal over the propane burner, as well as scarfing down crackers with cheese, canned tuna fish and sardines. I also needed a place to store the newly acquired gear. The only room I could find for storage was the barbershop in Penrose. Haircuts were not very popular in the early ’70s. When I appealed to Lew Perry for use of the barbershop, I will never forget Lew’s passionate rejoinder to the admission director’s objection: “You know, the students finally persuaded me to give up compulsory chapel, so as far as I am concerned, #&@! the barbershop!” 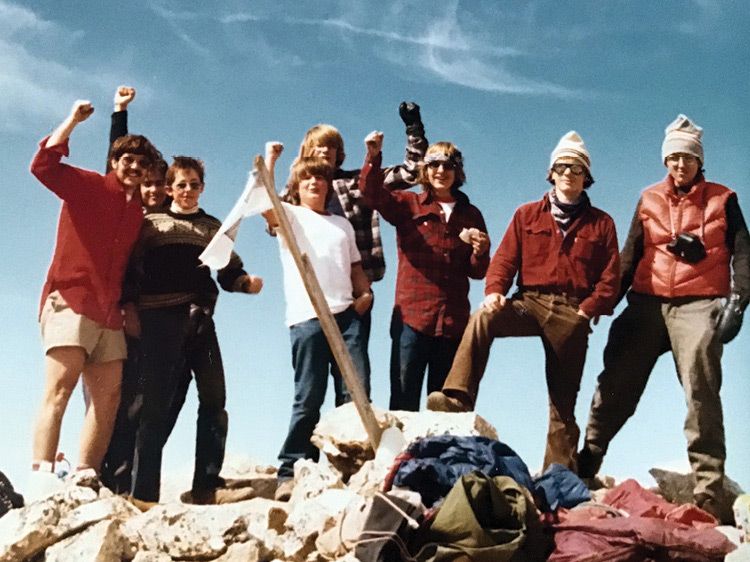 Summitting Mt. Democrat, the 14,155-ft. fourteener in the Mosquito Range

During weekday afternoons, we focused on learning and practicing camp crafting, mountain rescue techniques, map and compass skills, first aid, the identification of edible plants, and survival skills. But sometimes we would get a bit restless—anxious to get away from the campus to go on adventures. Fortunately, after Scott MacGregor built the aerial ropes course in the trees northwest of Penrose, we were able to focus more on ropework and rescue skills. On our early weekend trips, Jane Ruchman and I focused mostly on backpacking and peak climbs. Later on, when Chuck Warren joined the program, he taught more extensive technical rock-climbing skills to interested students. We also developed a winter program with ski touring, winter camping, and winter survival skills. Lester Guidry assisted with that the first year and helped arrange a great winter Interim program at the Lowe brothers’ ranch in the Wet Mountains of southern Colorado, which are named for the extreme amount of snow they receive in the winter. Chuck Warren also loved winter trips and became the definitive, master snow-cave builder.

As the outdoor ed group began to take more and more trips, the existence of Saturday classes became an issue. We wanted to have enough time to go to places like Longs Peak, the Collegiate Range, Blanca Peak and the Sangre de Christos. So many of us—along with the students who held strikes and sit-ins—pushed hard for the elimination of Saturday classes. We were successful, but one of the many unintended consequences of the success of that movement was the new “Saturday Activities Program,” which required teachers to plan weekend events and outings. This led to the beginning of “Stupid Night Out.” I still remember sitting around with Mark Dillon trying to think of something to plan for the students when he said, “Well, let’s just do something really stupid!” 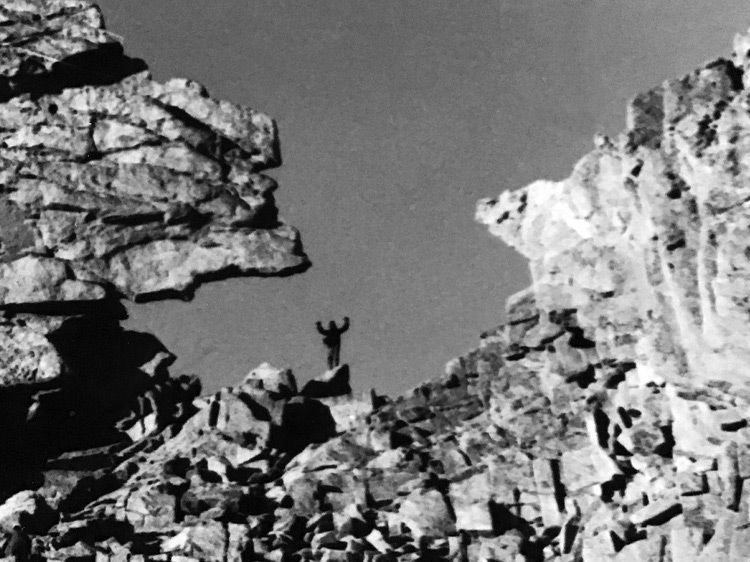 Reaching the Keyhole at Longs Peak, more of a climb than a hike, on the tallest fourteener in Rocky Mountain National Park

On another October day, much like the one when we were caught in a storm on a 14,000-ft. ridge, I awoke to the sound of shouts at 3:30 a.m. My nylon tarp was shredded and flapping in the wind. The poles of the students’ tents had snapped like matchsticks, collapsing the tents and waking everyone up. After quickly wolfing down some instant oatmeal, we packed up, left Jim’s Grove, and headed up the ridge toward the Boulder Field and the Keyhole below Longs Peak, a towering 14,259-foot mountain in Rocky Mountain National Park. Upon cresting the ridge, an unrelenting blast of an icy wind knocked the wind out of our chests. The liquid dripping from my water bottle froze. I decided it was not a good day to summit, and, with minimal protests from the small but hardy group, we headed back down, concluding that our adventure was a good “learning experience.”

Despite the unexpected hazards like this one, some the best experiences I had at Fountain Valley were on outdoor ed, Interim and orientation trips.

Kurt Hahn, the founder of Outward Bound always preached, “learn from failure and persevere.” After making it down to our vans later that day, we decided to come back to complete the summit of Long’s Peak another time—and the next year, we did. 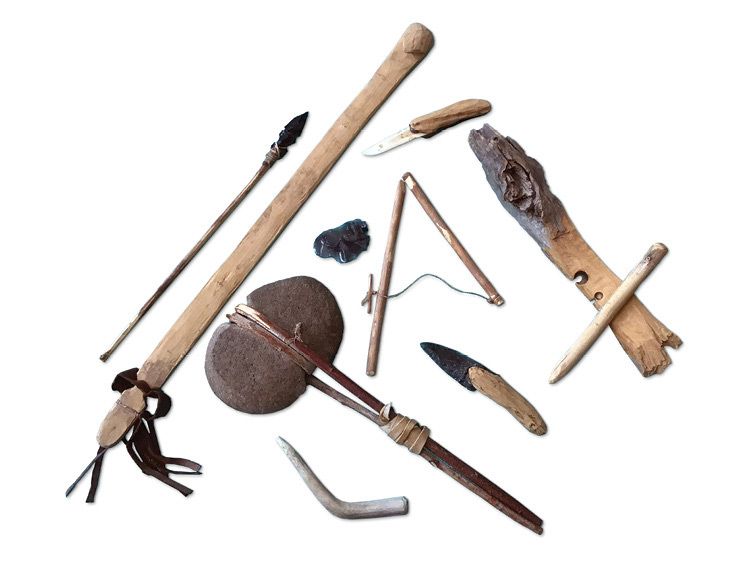 Tools made during the Primitive Survival Interim in Comb Wash, Utah. The Interim trip was organized and led by Waples who made a connection with a Native American to teach students how to make these primitive tools.
Back