10/18/2019
“I’m big on performance rather than results,” head soccer coach and assistant athletic director Kevin Ray says. “I want athletes to do the right things on the field and play well. And once they reach their potential, I have an expectation that they maintain that level.”
His teams’ performances have indeed led to big results—Ray recently tallied his 50th win since he arrived at Fountain Valley in the fall of 2017, coaching both boys and girls varsity teams. 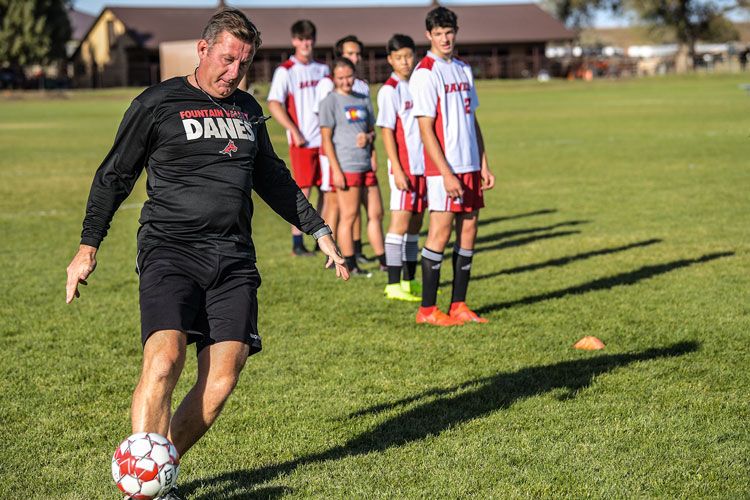 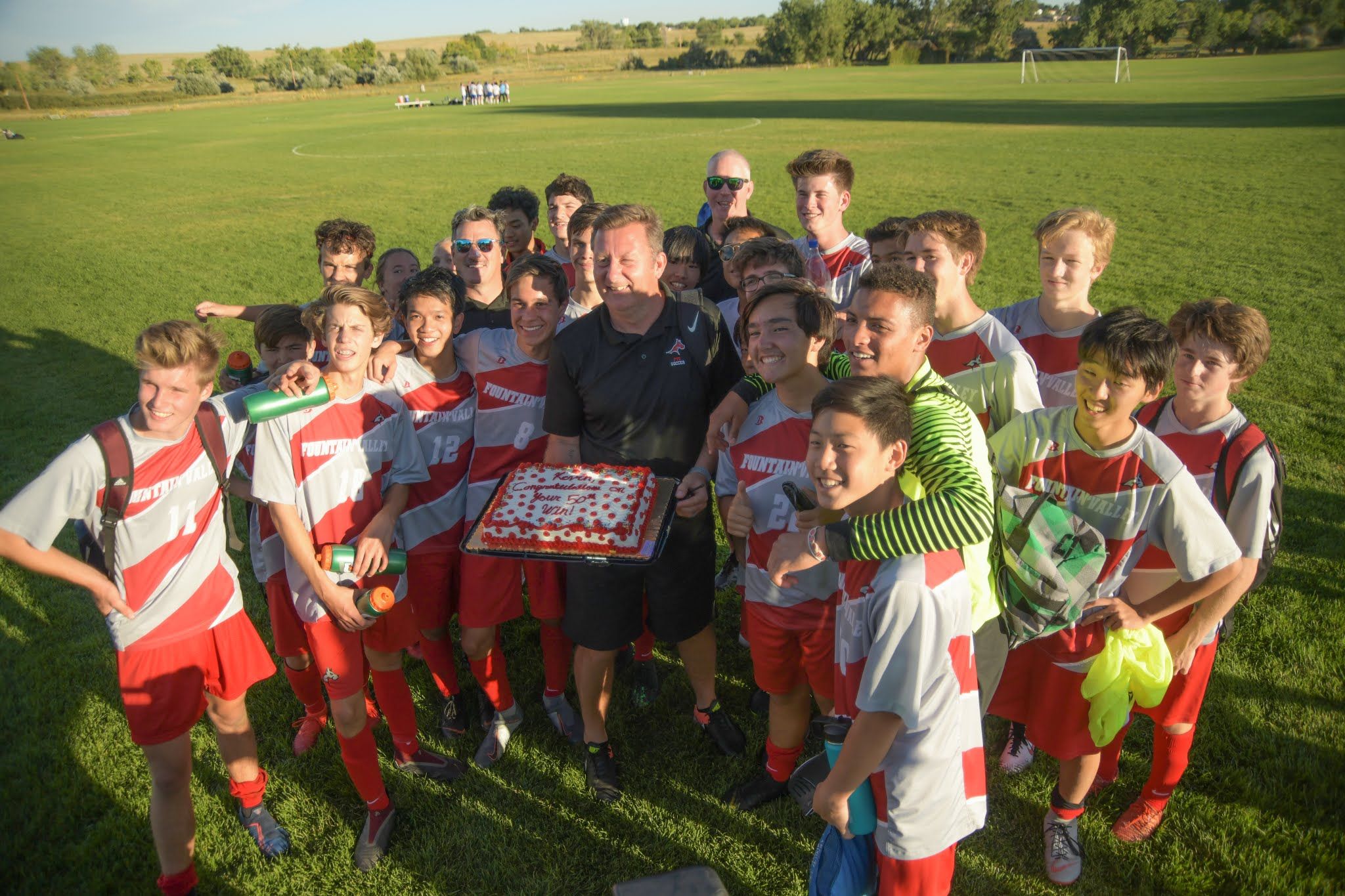 Coach and the team celebrating Coach Ray’s 50th varsity game win.
Ray has taught soccer for 20 years and competed both in college and professionally. “By nature, I’m a soccer coach,” he says.
Prior to coming to Fountain Valley, he worked with the Darlington School Soccer Academy in Rome, Ga. Previously, he coached at Huntingdon College, an NCAA Division III school, where he led the team to seven consecutive Great South Athletic Conference tournament appearances. He also served as an assistant coach for the Panama City Pirates of the Premier Development League, a senior staff coach for the Eclipse Soccer Club, assistant director of coaching for the New Territory Fusion Soccer Club, and assistant coach for Troy University's Division I women's program. He holds United Soccer Coaches (USC) Master Coach Diploma, USC’s Premier Diploma, USC’s National Goalkeeper Diploma and USC’s Director of Coaching Diploma. He has also earned United States Soccer Federation’s National Youth and B Licenses.
A native of England, Kevin came to the United States to attend college at the University of Montevallo, where he was a four-year starter and captained the team to the Gulf South Conference tournament championship in 1999. Prior to coming to the U.S., he played professionally for Fulham Football Club and Queens Park Rangers Football Club from 1992-1997.
Performance Over Results
“Once players reach their potential, I have an expectation that they maintain that level,”[1]  Ray says. I can be loving but I’m more demanding—I push them as hard as possible so they experience success. When they’re in the real world, they can use these life lessons as they become family people and business people.”
Last year, Aly Kassam ’19, who Ray coached for two years, was named 2A soccer player of the year and scored more goals than any player in any division in Colorado in 2018. He has gone on to play at Oglethorpe University, a DIII school.
Kassam says, “Mr. Ray is extremely demanding but fair. You always know that he wants the best for the team as well as its individuals, resulting in relentless motivation. For me, if I scored a goal he would tell me to score five. If I scored five, he would tell me score 10. He is an extremely motivational and knowledgeable coach, and I owe much of my success to him.” 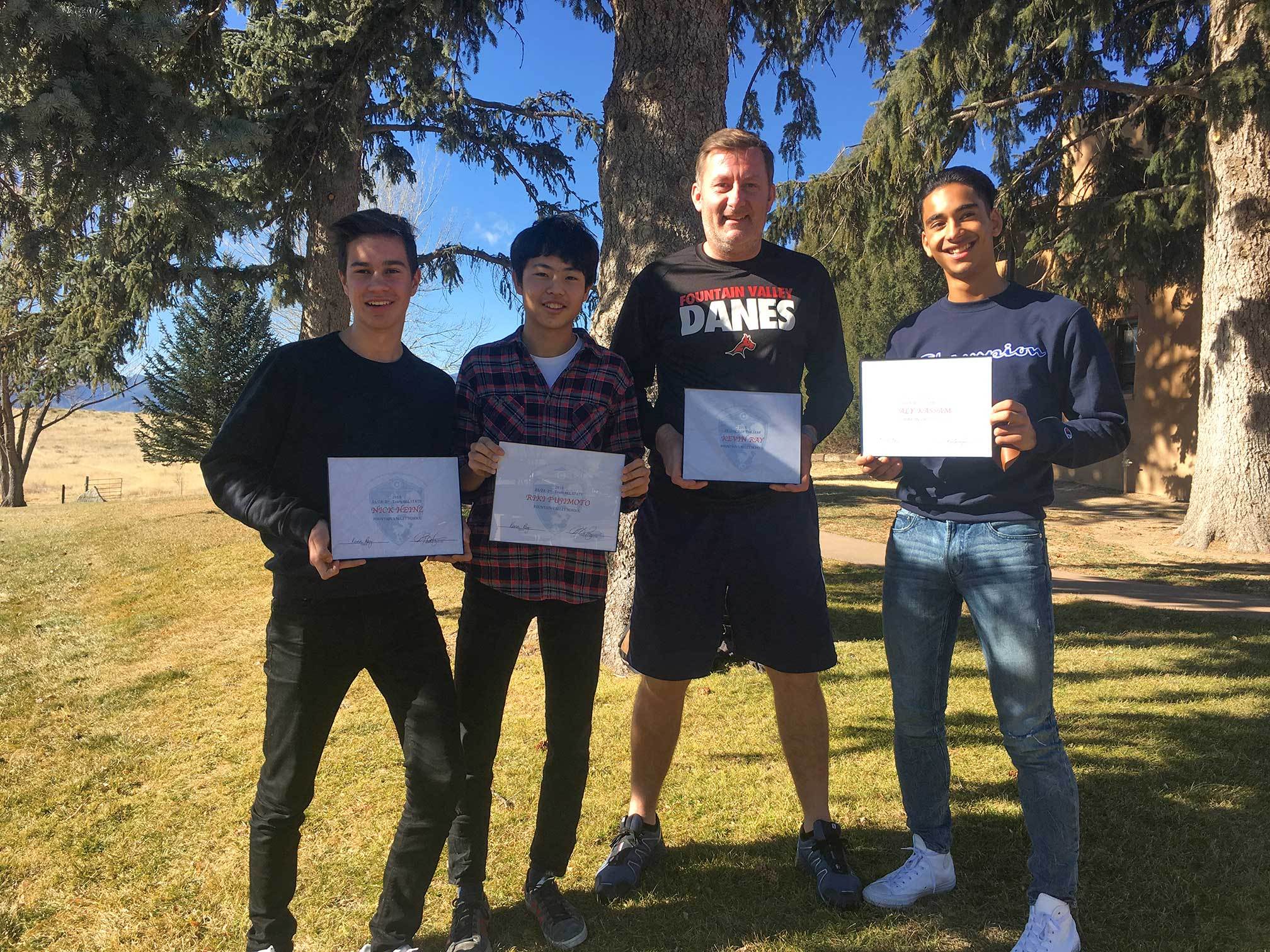 In 2018, Coach Ray was named 2A Soccer Coach of the Year and three of his players were named to All State teams. Students, left to right, Nick Heinz ’21 2A/3A 2nd team All State, Ricki Fujimoto ’22 2A/3A 2nd team All State and Aly Kassam ’19 2A/3A 1st team All State.
The Global Factor?
Soccer prevails as one of Fountain Valley’s strongest athletic programs. Ray thinks that having international athletes on the team plays well into the success of the boys program. This year, about half of the players are international, hailing from Japan, Germany, Vietnam and China.
“Normally for international kids, soccer is their number one sport, and when they come to Fountain Valley they want to continue to focus on it. Many come with strong skills, which often helps our American kids step up to the next level.” 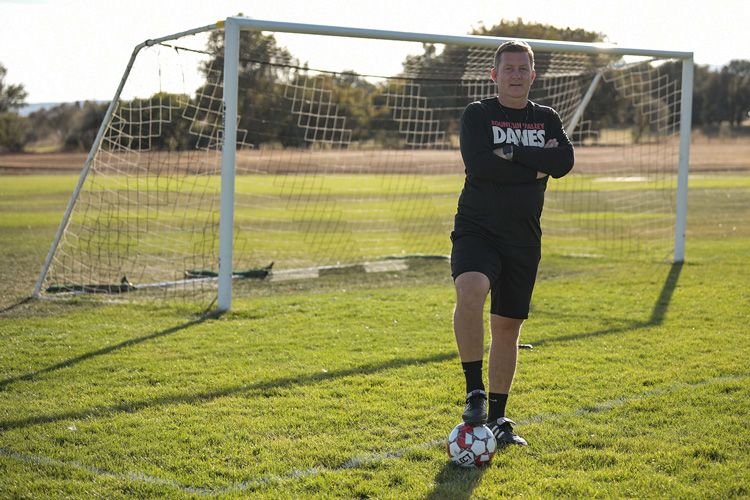 And when players get to that next level, coach Ray’s motivation and expectations make sure they stay there.
Go Danes!
Back